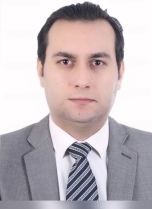 Rami Dabbas is a civil engineer by profession who writes for several media outlets. He is a pro-Israel advocate and human rights activist fighting against sharia law, radical Islamic terrorism and Arab nationalism. He connects with many NGOs and thinks tanks to promote peace with Israel and counter-Jihad organizations. He is a former Muslim who left Islam in 2012 and later became a Christian.