White evangelicals' approval of the way Donald Trump is handling the presidency has decreased significantly since February, a recent survey from the Pew Research Center suggests.

Between Nov. 29 and Dec. 4, Pew interviewed a total of 1,503 adults from all 50 states about their thoughts on Trump in a sample that represents the general public, not likely voters.

The organization found that Trump's approval rating has continued to slip during the course of his first year in office.

According to Pew, there has been an across-the-board decrease in Trump's approval rating, with most social demographics experiencing a decline in their approval of the way Trump is handling the office since February, including an eight-percentage-point drop in approval from Republicans.

The demographic where the decrease in approval for Trump's handling of the presidency is most noticeable is among white evangelical Protestants, a group that proved to be a core voting bloc for Trump in the 2016. Exit polls from the 2016 general election indicate that over eight out of 10 white evangelicals and white born-again Christians voted for the billionaire real estate mogul. 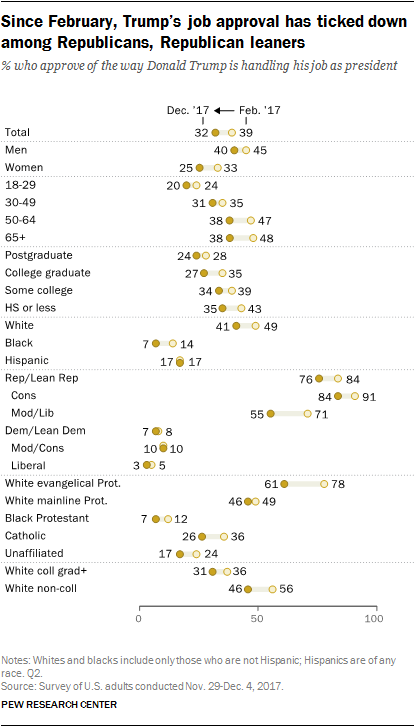 Although the Trump administration has given some conservative evangelicals much to cheer about through judicial nominations, pro-life policy initiatives and orders to protect religious freedom, only 61 percent of white evangelicals surveyed by Pew for the December survey said that they approved of Trump's handling of the presidency.

According to Pew, the 61 percent approval among white evangelicals represents a 17-percentage-point decline from the 78 percent of white evangelicals who said they approved of Trump's handling of the office when surveyed in the February.

The release of the December Pew data comes after the Public Religion Research Institute released data last week showing that among 351 white evangelicals surveyed between Oct. 8-30, 72 percent say that they "approve" of the job Trump is doing as president.

"What struck me is that Trump supposedly got 81 percent of the white evangelical vote and he now has 72 percent approval, which means that white evangelicals are still tracking roughly what they voted," Henry Olsen, a senior fellow at the Ethics and Public Policy Center, told The Christian Post in an interview last week after the release of the PRRI data.

"That suggests to me that if you looked at the Trump-backers among white evangelicals that he would have closer to 40 or 45 percent of 'strong' support. ... I don't have historical data to fall back on ... but that would make sense in the sense that there are people even among supporters of Trump [that recognize] that there is something that they are not 100 percent on [about Trump]. [Maybe] his behavior causes them to pull back."

The approval of Trump's handling of the presidency is now even more miniscule among black Protestants than it was February, declining from 12 percent approval to just 7 percent saying they approve of the way Trump is handling the job.

As for white Mainline Protestants, their approval of Trump's handling of the presidency dropped the least among the religious subgroups in the Pew survey — falling from a 49 percent approval to just 46 percent.

White people were another key voting bloc for Trump in the 2016 election. However, approval of the way Trump is handling the presidency among whites has fallen from 49 percent in February to just 41 percent in December.

Join thousands of others to get the FREEDOM POST newsletter for free, sent twice a week from The Christian Post.